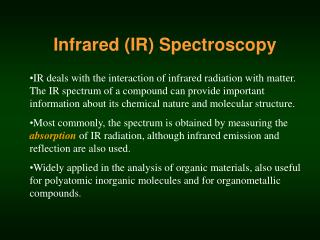 Infrared (IR) Spectroscopy. IR deals with the interaction of infrared radiation with matter. The IR spectrum of a compound can provide important information about its chemical nature and molecular structure.

SPECTROSCOPY OVERVIEW - . this cycle is directed to astronomers develops through a logical path which goes from

Gamma Spectroscopy - . nucp 2371 radiation measurements ii. spectrometer. since electromagnetic radiation does not cause

12. Structure Determination: Mass Spectrometry and Infrared Spectroscopy - . determining the structure of an organic