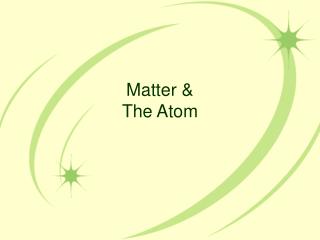 Matter & The Atom. Matter. The term matter describes all of the physical substances around us: your table, your body, a pencil, water, and so forth. Matter. Anything that has mass and takes up space (has volume) Made up of different kinds of atoms. Matter.