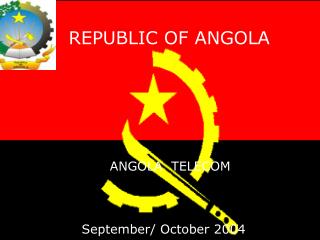 REPUBLIC OF ANGOLA - . a perspective on the strategy of the ministry of education in angola. domingos torres jr .

ANGOLA - . by, ryan treadway. religion. angola is a christian country. christian is 53% of the population. 38% roman

ANGOLA - . by, justin mendoza. to have fun. angola’s beaches and mountains.

Angola - . large coastal state on the south atlantic coast. cabinda is an oil-rich coastal enclave to the north of the

ANGOLA - A norwegian diplomat, charung gollar, was asked to present the un with a graphic presetnation showing the main

Bell-Ringer - . write a poem about africa. your poem should be at least 10 lines long. if you want, then use this line to