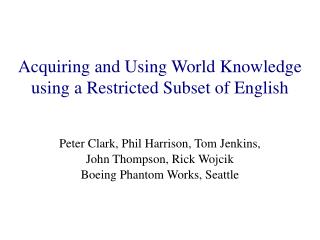 Using Knowledge in the Real World - . memory for discourse (sachs, 1967) passage sentence he sent a letter about it to

Acquiring and Integrating Knowledge - . “shaping for history” demonstrate and create opportunities for students to

Using Standard English - . how to write in a formal style. here is an informal phrase. laura scored a wicked goal against

Acquiring Goods and Services Using Barter and Money - . sol 2.8 review. what term is used to describe the exchange of

Conversion of an NFA to a DFA using Subset Construction Algorithm - . algorithm of subset construction`. operations on

Using ICTs in English - . a presentation by west school’s english teachers for the p&amp;c. tonight we will cover: