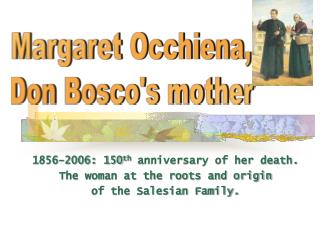 Margaret Occhiena, Don Bosco's mother. 1856-2006: 150 th anniversary of her death. The woman at the roots and origin of the Salesian Family. . Words of the Lord to Giovannino Bosco:. I am the Son of Her whom your mother taught you to greet three times a day.

THE CIVIL WAR AND RECONSTRUCTION - . “a house divided against itself cannot stand.” -- abraham lincoln. election of

Forensic Pathology - . students will be able to:. discuss the definition of death. distinguish between four manners of

CHAPTER 17 THE FINAL CHALLENGE: DEATH AND DYING - . learning objectives. how is death defined? why is the definition of

50 th ANNIVERSARY CELEBRATION - . “our members are the agricultural chemical professionals who serve those who feed the

Sex, Marriage, and Family - . part i. trobrianders. to attract lovers, young trobriand men and woman must look as

The Truth About Easter - . hotep-my-brother inc. bro. wamwara. outline. history and origin of the word easter how the