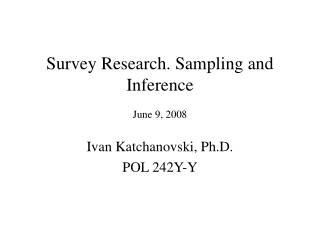 Sampling and Inference - . the quality of data and measures march 23, 2006. why we talk about sampling. general citizen

Sampling and Survey Research Podcast - . overview of sampling a word or two about survey research

Sampling Distributions and Forward Inference - . by simulating the process of drawing random samples of size n from a

6. Survey and Sampling - . when and why are surveys used in behavioral research?. what are the advantages and