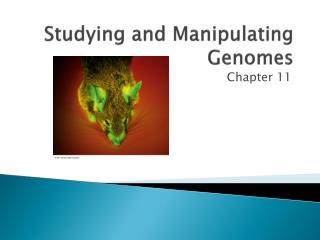 Studying and Manipulating Genomes. Chapter 11. Genetic Engineering. Genes are isolated, modified, and inserted into an organism Same or different organism Made possible by Recombinant DNA technology Cut up DNA and recombine pieces. Molecular Toolkit. 1. Get DNA and recombine it

Overview: Understanding and Manipulating Genomes - . sequencing of the human genome was largely completed by 2003 dna

Chapter 15 Studying and Manipulating Genes - . 15.1 personal dna testing. about 99% of your dna is the same as everyone

DNA and genomes - . dna and genomes. the phosphate groups have pkas of around 2 and around 7. this means dna is

Genomes and mutagenesis - . figure 9.15. the ames test relies on a mutant bacterial strain that is defective in hisg. -

GENOMES - . the entire genetic compliment of an organism. the complete set of instructions for making an organism it

Genomes - ? elsevier 2005.. the structure and complexity of virus genomes. virus genomes may be:single-stranded or