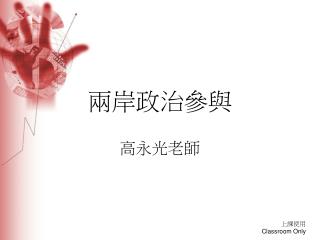 兩岸政治參與. 高永光老師. Contacting Officials. Contacting an official is very specific as to situation and time; a person contacts a governmental official out of concern about a given narrow issue that affects him or her directly--school taxes, road work, social security check, and so forth. .

Badminton Umpiring 101 - . compiled by mike wright updated may 2012. course objectives. the laws of badminton the

Harmonized System - . by ree russell us commercial service. what is the hs number?. a harmonized system is used because

The Federal Bureaucracy - . ap government unit 4b. bureaucracy. professional corps of unelected officials organized in a