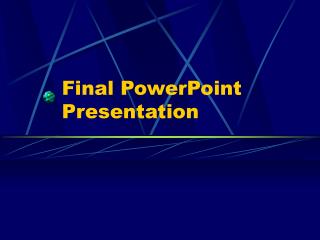 Final PowerPoint Presentation. The Wide World of Censorship . By: Donnia Zack-Williams Sarah D’Orsie Katie Sullivan. What is Censorship?. Censorship is a term often associated with totalitarianism, socialism, or anything but democracy.

k9sark final powerpoint - How does an air scent search &amp; rescue dog work? follow the pictures and descriptions on

Final Vocabulary PowerPoint - . brice holmes. stock. the goods or merchandise kept on the premises of a business or

PowerPoint Presentation - . . "succeeding generations are going to curse us for burning their future raw materials

Costume Final - . justine english. bustle. a ladies undergarment that assists in supporting the top layers of fabric in

Final Exam - . circle a b or c once you receive your test 80 multiple choice choose one open response to complete return