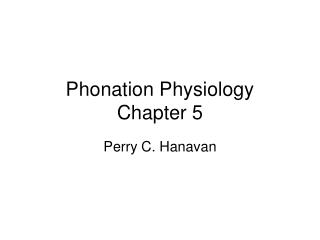 Physiology of Phonation - . ch. 5. nonspeech laryngeal function. protection is the most important role prohibits entry of

Phonation + Laryngeal Physiology - . january 14, 2010. the aerodynamics of speech. note: all sounds are created by the

Phonation and Laryngeal Anatomy and Physiology - . nothing is ever said on the stage without a reason. there are no

Changing phonation - . [p] followed by [a] [p] is voiceless [a] is voiced the switch from voiceless to voiced could

Topic 3b: Phonation - . learning objectives. possess a knowledge of laryngeal anatomy sufficient to understand the

Phonation, Part 2 - . lin 3201. some confusion…. some of you are getting confused between phonation and voiced

Anatomy of Phonation - . ch. 4. spoken communication. voiceless phonemes or speech sounds- produced without the use of

Renal Physiology: Chapter Goals - . after studying this chapter, students should be able to . . . 1. describe the