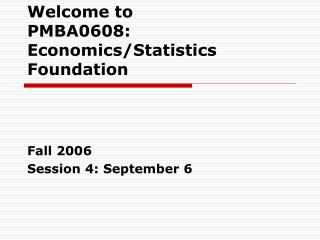 Welcome to PMBA0608: Economics/Statistics Foundation. Fall 2006 Session 4: September 6. Study. Chapters 1 through 4 of Mankiw Chapters 1 through 3 of Mendenhall, Beaver and Beaver Send me your questions I will do one or all of the following Answer you privately

Statistics - . how can you best represent statistical information and draw conclusions from it?. what is statistics?.