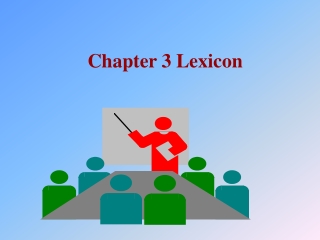 Chapter 3 Lexicon - . 1. what is word?. a unit of expression that has universal intuitive recognition by native

Chapter Three Lexicon - . 词汇学 what is word? the formation of words lexical change

Chapter Three Lexicon - . 1. what is word?. a unit of expression that has universal intuitive recognition by native

Mental Lexicon - . all of your knowledge about words and you know a lot of words! average college-educated adult speaking

The Lexicon - Overgeneration. x-bar theory can produce sentences that are not well formed.it overgenerates (generates

The Lexicon - . words: how we make them and use them. innovation. new words must fill a lexical gap can be filled by new

The Lexicon - . miriam butt november 2002. what’s in a lexicon. what kind of information should a lexicon contain?.

The lexicon - Langston psycholinguistics lecture 6. the lexicon. http://xkcd.com/1012/. what is a word?. a word is…