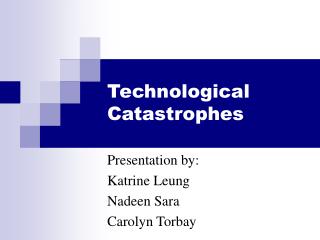 Natural Catastrophes - . wildfires. lightning strikes cause one out of every five wildfires. drought conditions, wind,

Catastrophes in J apan - . earthquake. on friday, 11 march 2011 there was the worst earthquake in the history of japan

Catastrophes and Recovery Goals - . the question: . what is the number and distribution of populations needed for a

Caribbean Catastrophes and the Market - . laurie a. johnson may 17, 2005. agenda. rms cat modeling in the caribbean 2004

NATURAL HAZARDS, DISASTERS AND CATASTROPHES - . a natural hazard – natural process that is a potential threat to human

Major Ethics Case Studies - . focus on the major technological disasters and catastrophes in engineering. module 4 in the