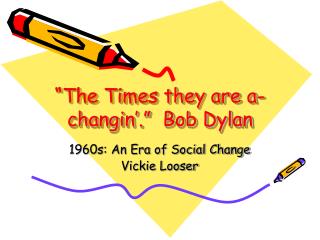 The Times They Are A’Changin’ - . computer specialists. fina ncial experts. hotel consultants. class one who are we?.

CSAVR The Times, They Are a Changin’ - . establishing a transition community of practice in your state fall 2005.

 The Times They Are A-Changin’  ( Bob Dylan) Can My Co-op Board? - . maura schwartz. [ turn and make] changes

The Times They Are A Changin ’ – Technology and the 21 st Century - . technology status update a continuation of our

The Times They Are A Changing - . data boot camp. c. schofield and e. subers. the journey…. what we did. ela: close and

The (Medieval) Times are A- Changin ’ - . political and social change. king richard and prince john. after king henry

Bob Dylan - . by mahaliah and meghan pedables. b orn in duluth, minnesota in 1941 under the name robert zimmerman from a

Bob Dylan - . not bob dylan?. from rob to bob. bob dylan’s popularity rose after his name change from rob zimmerman.

BOB DYLAN - . “a man is a success if he gets up in the morning and gets to bed at night, and in between he does what he

The times they are a changin’ - . are you ready to handle (lead) change at your home institution?. outline.