CAN YOU PASS THE 2011 GOLD QUIZ? - PowerPoint PPT Presentation 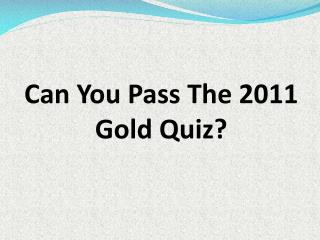 CPM Group recently released their 2011 Gold Yearbook, an invaluable resource for us gold analysts. Mostly a reference book, even a gold enthusiast might find it dry reading. But I loved it, and as I studied it on a plane, I kept finding data that made me perk up.http://www.whatisgold.net

Super Quiz ™ PowerPoint Test 8 2011-2012 - . question 1. which group in europe did proponents of enlightenment

WELCOME TO The National Level Inter DPS Quiz 2008 - . quarter finals. organized under the aegis of the dps society.

Pass the ball. When the music stops – whoever has the ball must say what animal it is. - Describe them! pass the ball

AP Computer Science DYRT Quiz 09.01-07 Key - . take out a piece of paper and pen . the quiz starts two minutes after the