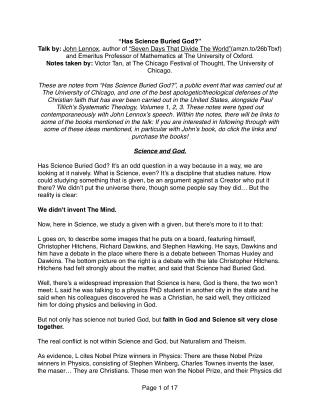 Join Oxford University's John Lennox in an evening at The University of Chicago at the Chicago Festival of Thought, with "Has Science Buried God?", a great evening of Christian thought from one of our faith's finest defenders in one of the best things that has ever happened for the Christian faith in North America. What God Has Put Together - . the dissolution of marriage in christian perspective rolan monje, bd, mmin and rico

Has Science Found God - New scientific" claims (i). creation a miracle: laws of physics violated at

HAS GOD SPOKEN? - . the need for revelation. revelation is needed!. without it man could never know: god’s character

God has whacked me

God has Given Us Memorials - . we live in a time where memorials are neglected and forgotten.memorials were instituted by

Has Success Buried You? - . ecclesiastes 4:4 “then i saw that all hard work and skillful effort come from rivalry. even

The Reason for God #7 Science Has Disproved Christianity (Part 1) - . “ …always be prepared to give an answer to

The Reason for God #8 Science Has Disproved Christianity (Part 2) - . science has disproved christianity. not. science

God Has Spoken - . are you listening. speak o lord. speak, o lord, as we come to you to receive the food of your holy

Science vs God - . chapman cohen. “gods are fragile things, they may be killed by a whiff of science or a dose of

Science versus God - . “but in your hearts set apart christ as lord. always be prepared to give an answer to everyone

FOUR THINGS GOD HAS DONE - . colossians 1:13-14. the point. false religions will always give jesus a place of prominence.