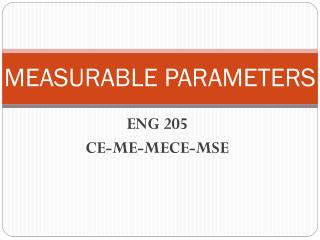 MEASURABLE PARAMETERS. ENG 205 CE-ME-MECE-MSE. VOCABULARY. CAPACITY (noun):. T he ability of someone or something to hold something This room has a capacity of 20 people. . SUPPLY (verb):. T o give or provide something needed Measurable Properties - . a person may have a large number of properties that are quantitative. person. name blood

Measurable Objectives - . identify multiple problem solving strategies for a given problem identify skills needed as a

Recognizing Measurable Goals - . objective. participants will be able to identify the three parts of a measurable goal

Parameters - . definition. way to control configuration allows for flexibility settings are hierarchical from user to