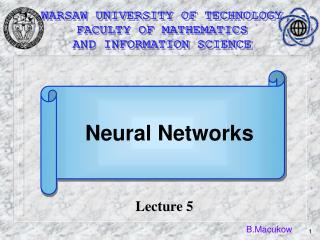 WARSAW UNIVERSITY OF TECHNOLOGY FACULTY OF MATHEMATICS AND INFORMATION SCIENCE. Neural Networks. Lecture 5. The Perceptron. The Perceptron. In 1962 Frank Rosenblatt introduced the new idea of the perceptron. General idea: a neuron learns on its mistakes!!

INTRODUCTION TO ARTIFICIAL NEURAL NETWORKS (ANN) - . mohammed shbier. outline. definition, why and how are neural

Neural Networks - . week 5. applications. predict the taste of coors beer as a function of its chemical composition. what

Neural Networks - . a neural network is a network of simulated neurons that can be used to recognize instances of