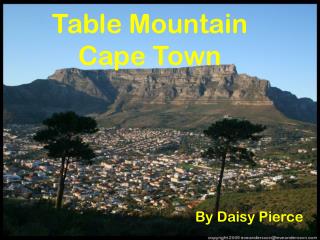 Table Mountain Cape Town. By Daisy Pierce. Table Mountain Facts. Table Mountain is a flat topped mountain overlooking Cape Town in South Africa It is 1,086 metres above sea level It is made from Sandstone The first person to climb it was Antonio De Saldanha in 1503. Table Mountain Tours in Cape Town - Want to enjoy exhilarating mountain bike tours in and around cape town? our most

Cape Town August 2013 - Using complexity theory to explore communities of philosophical enquiry: a rationale and some