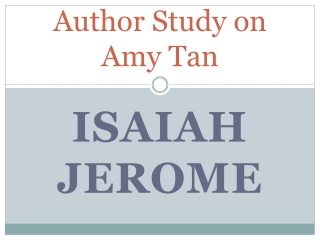 Author Study on Amy Tan. Isaiah Jerome. All about Ms. Tan. She is a female Born in Oakland, Cali in 1952 Her parents are Chinese immigrants Her father and one of her brothers died from brain tumors After the tragic deaths, her family moved to Switzerland Amy Tan - . 1952 --. personal life . born in california to chinese immigrants john, a minister, and daisy, who was forced

Amy Tan - . writing. her writing is very much related to events in her own life, and her stories have touched the

PowerPoint of Amy Tan - . by: tieley tsosie. biographical of amy tan. she was born in oakland california in 1952 to

Two Kinds – Amy Tan - . characterization. quiz: two kinds. what city is the setting? what is the name of the piano

“Two Kinds” by Amy Tan - . rc page 9. quickwrite. is it possible to expect too much from another person? do you

Author Study - Dr. michelle kelley wse. author study. what is an author study?. a unit that gives students the