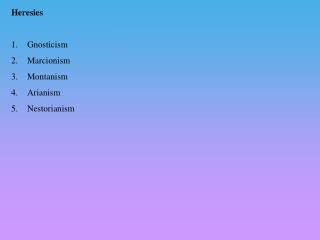 Semi-Arianism - . when constans died (350), and his semi-arian brother was left supreme, the persecution of athanasius

Gnosticism - . the quest for knowledge. why is gnosticism hard to grasp?. a belief system lack of central organization

Persecution of “The Way” and Heresies - . the first roman persecutions and the “five good emperors” pp. 46-54.

Where We Are - . christianity legal in 313 ce official religion of roman empire by end of 4 th century rise of arianism