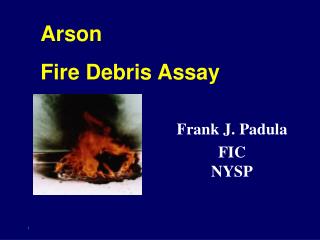 Lecture Arson Analysis of Fire Debris - . arson is defined as purposely setting fire to a house, building or other

Arson Analysis of Fire - Arson is defined as purposely setting fire to a house, building or other property. arson is the

Arson - . the common accelerants. the most commonly used accelerants are petrol, kerosene, mineral turpentine and diesel.

ARSON - . objectives : discover what arson is and how it is investigated. do now : what is arson? fill out the video

Arson - Defraud insurance. arson is one way to defraud property insurancemaximum effort to hide nature of crimeperiod of

Arson - . so, what is the fascination with fire?. fire is just plain mesmerizing… how many of you like to watch a fire

Arson - . arson. arson is the crime of maliciously, voluntarily, and willfully setting fire to the building, buildings,

Arson - . chapter 7. determining where &amp; how. point of origin most damage v pattern eyewitnesses. accident vs

Arson - . what is fire?. a study of arson needs to begin with an understanding of fire. fire is a rapid oxidation of a

Arson - . “fire”. ashes denote that fire was; respect the grayest pile for the departed creature’s sake that

Fire and Arson Investigation Fire Patterns associated with Ignitable Liquid Accelerants - . “ one of the major

Arson Awareness - . fire scene preservation. objectives. identify and describe the importance of observations made prior