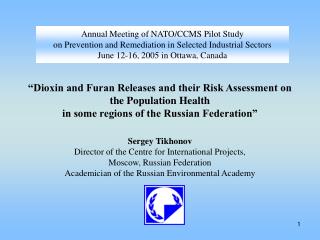 Annual Meeting of NATO/CCMS Pilot Study on Prevention and Remediation in Selected Industrial Sectors June 12-16, 2005 in Ottawa, Canada “Dioxin and Furan Releases and their Risk Assessment on the Population Health in some regions of the Russian Federation” Sergey Tikhonov

Embrace Technology - . andy pedisich technotics, inc. some notes about this session…. this session was developed in