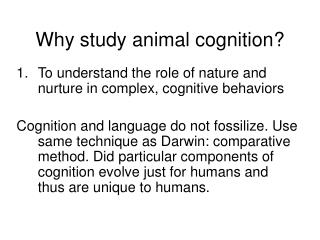 Why study animal cognition?. To understand the role of nature and nurture in complex, cognitive behaviors Cognition and language do not fossilize. Use same technique as Darwin: comparative method. Did particular components of cognition evolve just for humans and thus are unique to humans.

An example of a two-sided message - . commercial. i did stay at a holiday inn. message factors. rational vs. emotional

Cognition - . memory, thinking, and language. cognitive level of analysis (ib) the products of our biological machinery

Cognition Through the Lifespan - . cognitive functions. orientation ability to know one’s self, time and place