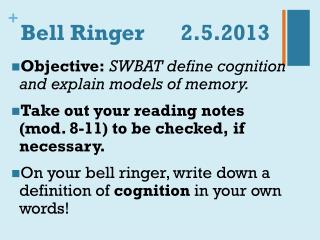 Bell Ringer 2.5.2013. Objective: SWBAT define cognition and explain models of memory. Take out your reading notes (mod. 8-11) to be checked, if necessary. On your bell ringer, write down a definition of cognition in your own words!. Overall average mastery. Period 6: 51.32% Bell - . ideal reader- one who understands all the nuances, terminology and structure of the text. reception theory- the

BELL WORK: - . take a guess and fill in the blanks according to what you think the missing word might be. . elements and

Bell Work - . what types of offspring can be made from a mouse who is heterozygous for having whiskers (no whiskers is