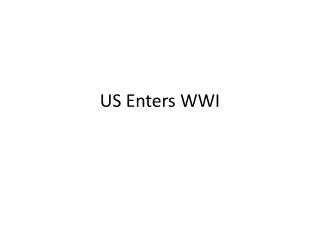 US Enters WWI - . in 1912 ___ was elected to be president. he strong opposed the expansion of us territory and the

US Enters The Great War (WWI) - . us neutral at first. maintained a policy of isolationism (monroe doctrine) us traded

The U.S. Enters WWI - . quickwrite. what events caused the u.s. to enter the war? why did the u.s. enter on the side of

US Enters WWII - . election of 1940. first president to serve more than 2 terms! breaks the tradition set by washington.

WWII US ENTERS - . americans join the war effort. 5 million volunteered for military service, still not enough for a war

US WWI - America in first world

THE UNITED STATES ENTERS WWI (1917) - . objectives. what challenges did the united states face while trying to remain

US Enters the War - . why and how. pressures to end neutrality:. russia exits the war (bolshevik revolution) us business

US Enters World War II - . u.s. armed forces mobilize. when the us entered the war, it had to bring its forces into