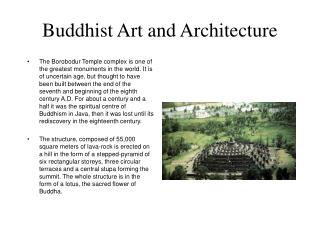 Buddhist Art - Art in buddhism. india, where the buddha lived and taught is the homeland of buddhism. during the first

MA Buddhist Art: History and Conservation - . this 12-month ma is interdisciplinary, offering a knowledge of: the central

ART and ARCHITECTURE - . greece. art and architecture. greek art:  works of art produced in the aegean basin. this

Early Buddhist Architecture in Japan - . i. some basic values in east asian urbanism influence the design of many

Medieval Art and Architecture - . questions. what is art? what is architecture?. art. medieval art reflected many