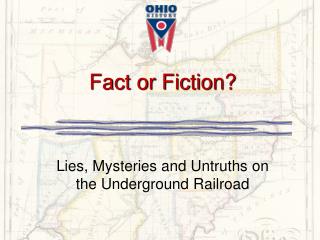 Chronosynclastic Infundibulum - . a quiz on speculative fiction. 1 a) this is a panel from which comic? b) which

Writing for Recognition - . writing for recognition promoting volunteers and volunteerism. sniff out, fetch and

What is the best way to find the truth? - . fiction and nonfiction . fiction a made up story can tell about things that

Medicinal Mushrooms - . fact, fiction andfolklore. what we know…. today, there are over 270 identified fungal species

Fact or Fiction? - . did berendt take the anecdote too far?. midnight in the garden of good and evil. written by john

Fun Fact - We get copies of every selection from oprah’s book club, courtesy of oprah and the american library