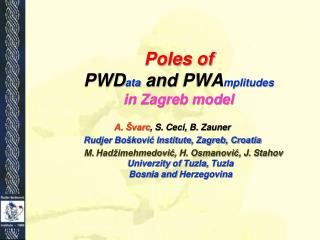 Poles of PWD ata and PW A mplitudes in Zagreb model. A. Švarc , S. Ceci, B. Zauner Rudjer Bošković Institute, Zagreb, Croatia M. Hadžimehmedović , H. Osmanović , J. Stahov Univerzity of Tuzla, Tuzla Bosn ia and Herzegovina. How do I see what is our main aim?. Magnetism - . what is magnetism?. magnetism is the attraction of a magnet to another object. what are magnetic poles?.

Totem Poles - . what are your traditions?. symbols – tell a story. totem poles are made by the tlingit indians of the

Magnetism - . magnetism force of attraction or repulsion between unlike or like poles due to the arrangement of electrons

Electricity and Magnetism - . chapters 20 and 21. magnets. magnetism is created when magnets have two ends or poles,

Magnetism - . magnetism. click for more info. 1. magnet. any material that attracts iron. regions in a magnet where

20.1 Magnetic Fields All magnets have two poles: N and S - Like poles repel and unlike poles attract. 20.1 magnetic

Croatia - . economic systems. its economy has suffered greatly during 1991-1995 it has begun to bounce back though the