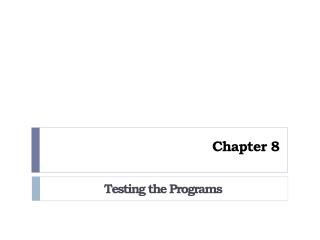 Chapter 8. Testing the Programs. Integration Testing. Combine individual comp., into a working s/m. Test strategy gives why & how comp., are combined to test the working s/m. Strategy affects not only the integration timing, coding, cost & thoroughness of the testing.

Honest Work by Ciulla et al. Chapter 8 - In this powerpoint we discuss the dependence effect and the ethics of