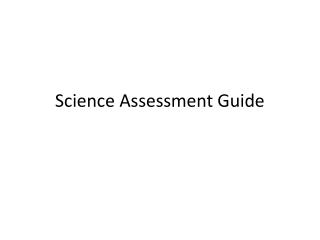 Science Assessment Guide. Use the picture below to answer question 1. TREE RINGS 1. A scientist is studying the rings of a fallen tree. What question can be answered by studying the tree rings? A. How old is the tree? B. How tall is the tree? Science Assessment Guide - . use the picture below to answer question 1. tree rings 1. a scientist is studying the rings

Review Guide Assessment: - . on a post it note, write your name set a goal: how do you plan to study for this exam, when

GCSE Science Assessment - . learning objectives. to help you and your child understand which science gcse’s your child

Assessment in Science - . advice and support. contents. type of assessment and frequency using the qca ‘assessing

Science Study Guide - . chapter six. the rocky outer layer of the earth’s surface is called the crust. rocks break down

Science study guide - . sc.a.1.3.1. the kinetic of matter- states that all of the particles that make up matter are

Dummies Guide Self Assessment - . what did i do well ? what could i have done better? what did i find difficult ? what do