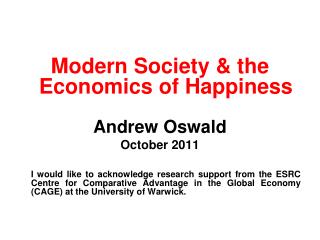 Modern Society & the Economics of Happiness Andrew Oswald October 2011 I would like to acknowledge research support from the ESRC Centre for Comparative Advantage in the Global Economy (CAGE) at the University of Warwick. Is western society going in a sensible direction?. Happiness, Lottery Winners, and Your Heart Andrew Oswald Warwick University - . * much of this work is joint with

Herds, Houses and the Crisis* Andrew Oswald - . *many thanks to danny blanchflower and amanda goodall for valuable ideas.

**We would like to acknowledge: - Translating evidence-based assessment into educational practice: building a dream.

Happiness at Work Andrew Oswald University of Warwick, UK - With many thanks to professor andrew e. clark (paris) for

The Economics of Happiness - Dinners. how to make. with the. reader. the economics of happiness. #3. a woollen coat.

“ HVETian that I would like to become” - . presented by madhumala pathy ravenshaw unit. name of the hvetian i would

I like I would like - . some bananas. a banana. bananas. apples. an apple. some apples. a pear. pears. some pears.

The PMRS Ottawa Chapter would like to acknowledge the support of the following organizations. - The pmrs ottawa chapter

Would you like to study at the London School of Economics (LSE)? - Checklist before you contact us: proficiency in

A shop I would like to have - . projectwork done by nureev timur 6 form 2014. my shop indoor. my shop outdoor. shop’s

The Economics of Happiness - . group g. overview. mark anielski has served as an economic policy advisor to the alberta