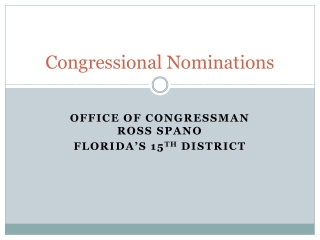 Consolidated Nominations - . jeramie kilpack mary white. customer survey response. “… i would like to have the

2012 NOMINATIONS - . jean todd fernbrae manor a unicare homes community “jean loves people, and this is evident by the

2008 Nominations - . and looking ahead to 2012…. why the chaos?. extreme frontloading gets rid of momentum in the

Oscar nominations - The nominees for the 2017 academy

Nominations and Campaigns - . chapter 9. the nomination game. nomination: the official endorsement of a candidate for

Congressional Process - . otherwise known a s how a bill becomes a law. here is one version.

Congressional Leaders - . congressional leadership is organized strictly by political party. so where do we start?.

Congressional Powers - . where congress gets their power. the constitution specifically outlines what congress can and