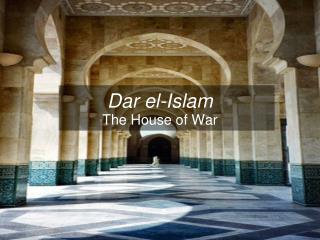 Dar al-Islam - . literally = house of islam commonly refers to lands heavily influenced by islam or where muslims can

El verbo dar - . “to give”. formas. yo doy i give t ú das you give Él/ella/ud da he/she gives/you give. nosotros

ABC’s of Islam - . kent ratliff. arabic. arabic is the language of islam. islam is meant to be practiced in arabic.

Islam and the State - . “a common word between us and you”. document on theological grounds for reconciliation

Islam is peace, Islam is ease, Islam's not danger or disease. Islam is love and prosperity. Islam's not hatred or - Ity.

ISLAM: Submission to the Will of Allah - . golden age of islam. the judeo-christian foundations of islam. islam an