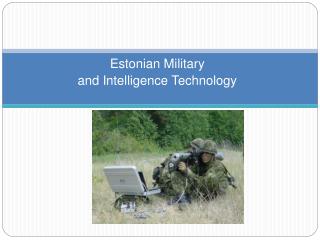 Estonian M ilitary and I ntelligence T echnology. Estonia. Population 1,340,000 The size of defen c e forces in time of peace is about 5 , 500 men The defence union which collects voluntary troops consists approximately of 10,000 men There are about 30,000 men in the reserves I nformation T echnology - . it programs coding edi device order tracking. our concept is build up a network for on-site

SPACE T ECHNOLOGY - . space technology is technology that is related to entering, and retrieving objects or life forms

T echnology Lab - Jódar castle ( remains from the year 890) was founded by iberians and it is the oldest of andalucía .