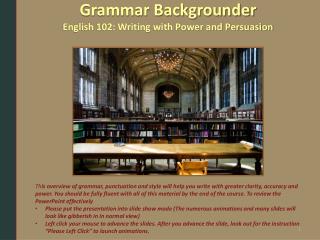 Grammar Backgrounder English 102: Writing with Power and Persuasion. Th is overview of grammar, punctuation and style will help you write with greater clarity, accuracy and power. You should be fully fluent with all of this material by the end of the course. To review the PowerPoint effectively

Chapter 5 Improving your writing: grammar and self-editing - . learning objectives. on completion of this chapter

The Art of Persuasion: Intro to Rhetorical Analysis - . what is rhetoric?. rhetoric:. rhet·o·ric ˈretərik noun 1. the