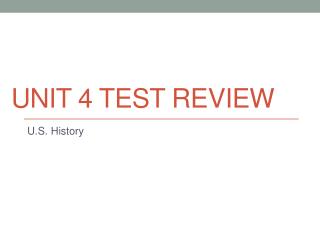 Unit 4 Test Review - . answers. chapter 11. cotton gin. who invented ? eli whitney why is it significant? led to the

Unit 4 Test Review - . by sarah berni. during the red scare, there was widespread panic about what?. communism. what was

Unit 4 Test Review - . ms. grant . unit 4 test review. there is less variation in temperature at the equator during the

Unit 4 Test Review - . islam. what is a caliph?. a successor to the prophet muhammad. explain the debate over who would

Unit 4 test review - . proportional relationships. round 1. each question is worth 1 point. what is a unit rate? . unit

Unit 4 Test review - . 6 th grade earth-moon-sun system. #10. roman is writing an equation to show the effect of the

Review for Unit 4 test - . you can do it!!!!. without gas exchange, a plant would be unable to. make food make

Unit test Review - . be prepared to demonstrate knowledge about: -use of archetypes in novel -how characters develop

Test 4 Review - . for test 4, you need to know: definitions the recursive definition of ‘formula of pl ’ atomic

Test 4 Review - . chemical reaction . a process by which one or more substances are changed into one or more different