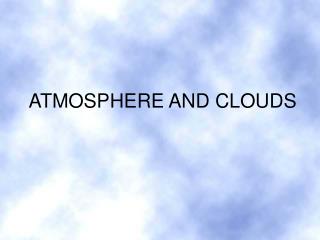 Atmosphere, Clouds &amp; Weather - . what is atmosphere?. atmosphere is the mixture of gases that surrounds a planet,

Water vapor, clouds, aerosol and radiation in the atmosphere Reinout Boers, KNMI - . purpose what is sensitivity of

Pudding and Clouds - . pictures and notes. use textbook as second source of information. for info on atom: pages 105-108

Clouds and Precipitation - . 6.1 and 6.2. clouds – how they form. clouds form when water vapor in the air condense to

Clouds and Precipitation - . weather. how do clouds

Clouds and Climate - . a. pier siebesma knmi. what are clouds? how do they form? cloud climatology clouds and radiation

Clouds and Humidity - . the water cycle. three requirements for a cloud :. a cooling mechanism moisture condensation

Clouds and Precipitation - . air masses. pg 480. humidity. humidity is a measure of the amount of water vapour in the

Atmosphere - . structure and composition. concepts to learn. the general concepts found in this section are: the earth's