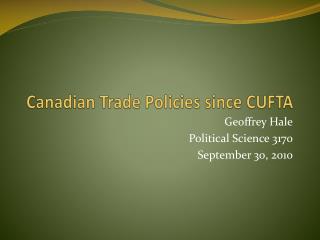 Canadian Trade in the MENA Region - . total trade has risen up from c$18.3 billion in 2011. * trade statistics for west

The Decline of the Canadian Welfare State: Policies and Implications of Retrenchment - . for all intents and purposes the

What’s New at the Canadian International Trade Tribunal? - . a strategy for injury determination. outline. what is the

The TRADE Act of 2008 A Fair Way Forward on Trade - . the oregon fair trade campaign. or-ftc. what we’ll cover….