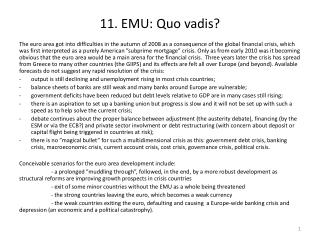 NWSSIP and the way forward… Coordination, harmonization and alignment in the water sector - . meeting of nwssip

Back to the Future: Quo Vadis ICIS? - . richard bruskiewich. back to the future. pragmatic concerns for development

The views expressed are my own and not necessarily those of the ECB. - Dsge modelling at central banks: quo vadis? frank

The Quo Vadis, Femina? project goal is - Quo vadis, femina? the vision of women on sustainable life the project quo