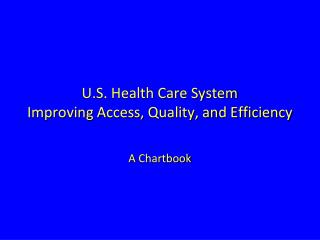 A Need to Transform the U.S. Health Care System: Improving Access, Quality, and Efficiency - . a chartbook compiled by

Measuring And Improving The Efficiency And Quality Of Care - Opportunity for improvement. indicated care given only 56%

Improving Access to Health Care through Insurance - . catherine connor, mba abt associates inc. february 2010. what we