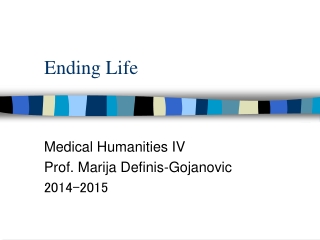 Ending Life. Medical Humanities IV Prof. Marija Definis-Gojanovic 2014-2015. Conceptual Issues. SUICIDE (S) – involves one intending one’s death either as and end itself or as a means to some further end ASSISTED SUICIDE (AS) – involves someone helping another person commit suicide Ending - . workshop 2. learning goal. improve your ability to write a neat conclusion take out your weekend homework (the

Ending Stereotypes - . the lives of men are changing dramatically – their relationships (especially with women), home

Ending Segregation - . responding to apartheid in south africa. apartheid policy. apartheid (from the afrikaans word for

Ending Opposition - . can i join in, i’m austrian too!!!!. learning objective. can a rainbow help us explain how hitler

Ending Poem - . by: aurora levins morales and rosario morales. this is our country and its run by men!. immigrants

TADIA Ending - . who won?. all right. the votes you guys receive will give you points if that person wants you to win.

ENDING STAGE - . ending the group’s work. “ the skills workers use in the ending stage determine, in part, the

Ending WWI - . change high point. germany seemed in good position after brest-litovsk no 2-front war could put all of its

Ending Thoughts - . driscoll. a number of descriptions of learning, all are incomplete. . layers. social psychological

Does school life seem like a never ending cycle? - . are you struggling to stay on top of things?. are you shouldering