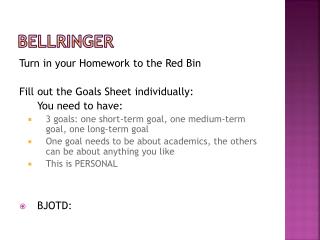 Bellringer. Turn in your Homework to the Red Bin Fill out the Goals Sheet individually: You need to have: 3 goals: one short-term goal, one medium-term goal, one long-term goal One goal needs to be about academics, the others can be about anything you like This is PERSONAL BJOTD: .