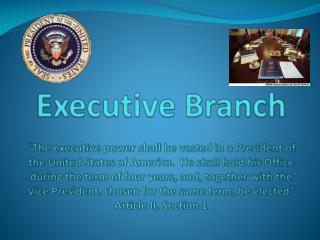 Executive Branch “The executive power shall be vested in a President of the United States of America. He shall hold his Office during the term of four years, and, together with the Vice President, chosen for the same term, be elected” Article II, Section 1. Club President - . role, duties, and responsibilities. what will i be learning in this course? . upon completion of this

U.S. Constitution Flash Cards - . make these cards and you will do great on the test!. who was the author of the

Basic Criminal &amp; Constitutional Law: The Court System - . essential question: can the police really do that?. the

Basic Criminal &amp; Constitutional Law: The Court System - . ps-ilj-4. students will analyze the structure of the

WHAT WERE THE AIMS OF EACH PIECE OF LEGISLATION OR CONSTITUTIONAL AMENDMENT - . federal trade act set up federal trade

Practice - . you are interested in how citizens of the us feel about the president. you asked 8 people to rate the

Club President - . role, duties, and responsibilities. upon completion of this course you will…. know the

Unit 3 Constitutional Change - . essential question. how has the constitution been changed to further the ideals