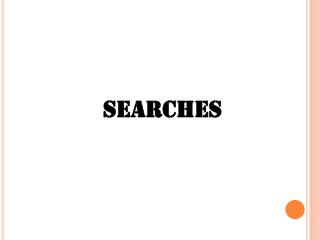 Searches. After a receipt of a bomb threat, responsibility for mounting a search lies with the organization concerned, not the Police. Search teams should be organized and assigned definite areas. In view of the risks, involved teams should consists of volunteers. Searches - . law 120. searches. the law must seek a balance between an individual’s right to privacy and the state’s

Administrative Searches - . from frank to the patriot act more information on administrative searches. where do we learn

Administrative Searches - . the lessons from see and camara. administrative searches and terrorism. post 9/11, the

Advanced Searches - . using history. advanced searches what?. for a given session, a list of standard format past

Standard Searches - . by ken nguyen 2011. searches. given a list of n elements and a key k value to search against the

Personal Searches - . who may enter the interior of the jail and conditions for such entrance. members of the local