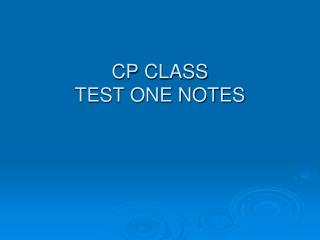 Chapter One Class notes Intro to Finance - . what is finance?. what are the tasks of the financial manager ?. from

CP Projectile Test Answers - . 1. which of the following best represents a graph of horizontal position as a function of

Class One - . economics 2013 - july. decisions!!!. a household and an economy face many decisions : who will work? what

Class Notes 2: - . microscopes. i. the light microscope . a. microscopes enabled scientist to view and study the cell.