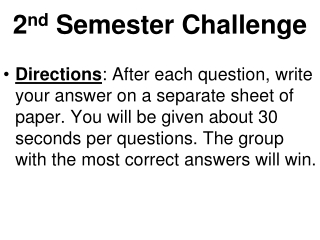 2 nd Semester Challenge. Directions : After each question, write your answer on a separate sheet of paper. You will be given about 30 seconds per questions. The group with the most correct answers will win. Evolution 10 questions.

2 nd Semester Challenge - . directions : after each question, write your answer on a separate sheet of paper. you will be

2 nd Semester - . 1 st 6 weeks vocabulary review. 1. sarah lied about everything. it seemed she had a compulsion to lie.

2 nd Semester - . 2014. grab your phone! sign up for your environmental science messages. this is your  remind101 number

2 nd Semester Exam - . study guide. # 1 and 2 name the layers of the earth. describe the composition of each of the

2 nd Semester Review - . a mass attached to a spring vibrates back and forth. at maximum displacement, the spring force

2 nd Semester Exam - . study guide. binary- what is it? . a binary number is a number expressed in base-2 numeral system,

Daily Grammar 2 nd Semester - . keep going!. infinitive phrases jan. 12/13. a verbal that begins with the word to and