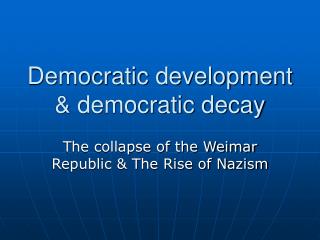 Primary push in New Hampshire - All across new hampshire, crowds are gathering to hear and see the democratic and

Hillary on the trail - The democratic front-runner on the campaign

Fashion for Hillary - Fashion designers and models show off the "made for history collection", supporting the

The Development of a Quality Improvement Network for Addiction Therapeutic Communities - Natalie wood and paul goodman.

ACTIVITY-1 - . 1. transparency as a concept in the election management has always been there, not just in india but in

FDR and the New Deal - . ap us - unit 13 chapter 36. election of 1932. hoover received the republican nomination though

8 th Grade Review - . part one. the teachings of enlightenment thinking listed above provided the basis for the. natural

TYPES OF GOVERNMENTS - . a world with no government is called anarchy democratic governments democracy = rule by the