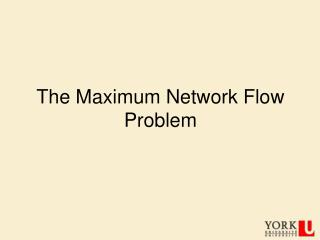 V13 Solving the Maximum-Flow Problem - . we will present an algorithm that originated by ford and fulkerson (1962).

Maximum Flow - . maximum flow a flow network g=(v, e) is a directed graph where each

An Application of Maximum Flow: The Baseball Elimination Problem - . we are given the following tournament situation:

Generalized Network Flow (GNF) Problem - . each arc ( i , j ) has a multiplier  ij if 1 unit of flow leaves node i on