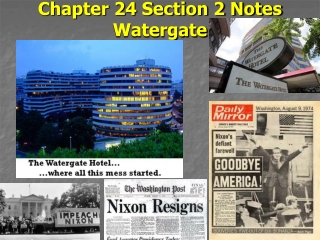 Chapter 24 Section 2 Notes Watergate. The Imperial Presidency (1930’s - ?). Our Govt. has a strict balance of power between executive, legislative, and judicial branches according to the Constitution Changes in the 1930s. More power to Presidents than

Chapter 24 Section 2 - Learning goal: students will be able to analyze the people and events that shaped the social,

Chapter 2 Section 3 Notes - . i. geography of india. india. a. subcontinent is a large distinguishable landmass on a

Chapter 17 Section 2 Notes - . intro: 1.in the 1400’s northern europeans began to adopt the ideas of the renaissance.

Chapter 3 Section 2 Notes - . fluid. any substance that has the ability to flow (move on its own) two states

Chapter 2 Section 1 Notes - . what is matter?. chemistry. chemistry: the study of matter and how it changes examples of